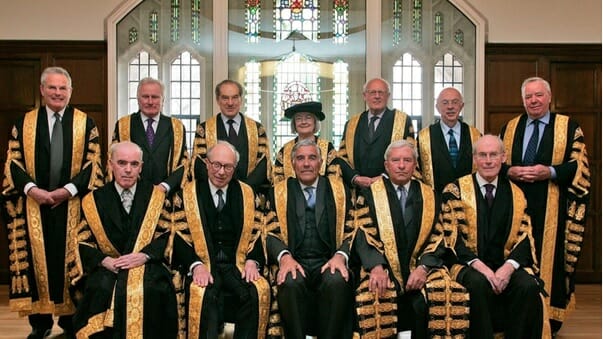 With any gender inequality workplace news, there comes calls for better media representation. Not enough female doctors? Make a film about one. A lack of women in the construction industry? Fund a documentary. Too few female barristers? Get rid of a male TV character and make room for a female one. Well, that's what a Telegraph article is suggesting the world do to address the law industry's gender imbalance.

As the paper reports, new findings from legal ranking company Chambers and Partners show that less than a quarter of UK-ranked barristers are female. This figure has increased by only five percent since 2010.

Clearly, more needs to be done. One potential solution may be to show female barristers doing their thing on a respected TV series. Claire Darwin, a barrister at Matrix Chambers, told the Telegraph: "Growing up, long before I met any real barristers, I was a huge fan of This Life, the BBC Two drama about young barristers."

Diya Sen Gupta QC, from Blackstone Chambers, instead espoused the importance of "real life role models" like the Supreme Court's Lady Hale, telling the Telegraph: "I firmly believe that you can’t be what you can’t see."

But is representation in the media, or in real life, enough to make a tangible difference? Or does there need to be harder action from within the industry itself?

"Media is all about sharing information and knowledge, which can influence the choices people make, says Danielle Ayres, senior associate solicitor at Gorvins Solicitors, "so increasing the number of female barristers and solicitors on TV and other media channels could help to encourage more women to be interested in the law." But, she adds, "this alone will not change the gender imbalance within the law industry."

"Of course, the media does have an influence and can glamourise professions," notes Maxine Park, a qualified solicitor and founder of DictateNow. But she also recognises a secondary point: that "we live in an era where it is very easy to become well-informed." For that reason, she recommends young women interested in the profession use social media to connect with female barristers.

Strangely enough, the aforementioned statistics don't appear to be a wholly accurate view of the entire industry. As Sky News reports, there is an almost equal number of men and women studying to be barristers. Recent figures from the Solicitors Regulation Authority (SRA) show that 48 percent of lawyers working in law firms are female, and 58 percent of in-house solicitors are women.

The issue doesn't seem to be the number of women entering the law industry; it's the barriers blocking women from obtaining more senior positions. In December 2017, just under 15 percent of Queen's Counsel barristers were female, states Sky News. And, reports Stylist, women make up only a third of partners in law firms. Ayres says the legal sector "needs to make changes... to enable those already [working in the profession] to progress."

A gender pay gap still persists too. The average pay gap equated to 20 percent for the 25 biggest UK law firms in 2018, reports Lawyer Monthly. But, when partner income was included, some firms' pay gaps shot to over 60 percent.

There is also an issue of sexual harassment. A survey commissioned by The Lawyer of 1,000 lawyers and other employees working in the UK's top 100 law firms found that 42 percent of women had experienced sexual harassment at work. Even a law student admitted to Sky News that there was a distinct sense of "lad culture" at the Bar.

Yet another problem arises when women decide to have a family. Amanda Pinto QC, vice-chair of the Bar Council, told Sky News: "The Bar is a difficult profession because you don't necessarily know if you're going to be working a very long day or get home to pick up your children. It's that uncertainty that makes it hard."

Flexibility is an urgent call from some legal insiders. "Real change can only be achieved if those responsible for policy in barristers' chambers follow the lead now well-established in the solicitors' branch of the profession: facilitating parental leave, returners following career breaks, and flexible working," states Goodman Ray solicitor Jemma O'Neill.

The Bar Council have a helpline and mentoring initiatives to help female progression, though it will take time to measure any impact they may have.

Many of the insiders I speak to are remaining positive about the future and any initiative to make a beneficial change. "Women are [being] more and more portrayed as confident and strong characters and there are more and more female lawyers becoming partners — our firm in particular is a great example of this," says Elizabeth Jaques, another solicitor at Goodman Ray.

But, she notes, there is still a "divide" with an underlying theme that women in the industry are "less pushy and aggressive" compared to their male counterparts. "However, I feel women are building each other up in the legal world and it will only get better."

"Anything that normalises female barristers has to be welcome," Park finishes.